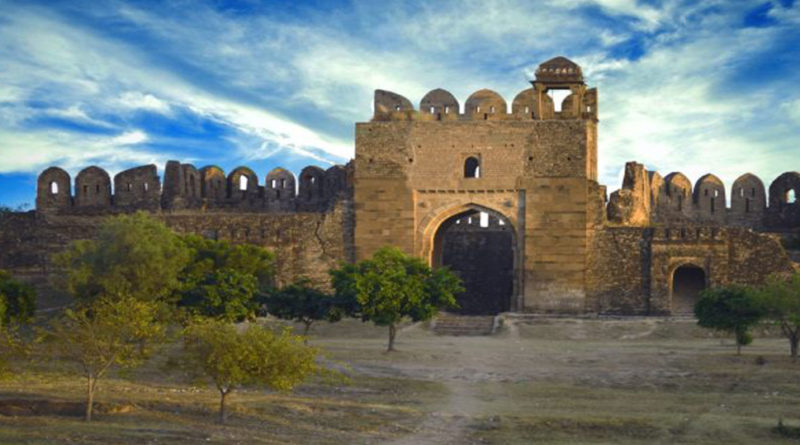 Here we are bringing you on an amusing journey to explore the infotainment hidden in the forts in Pakistan. Top historical forts in Pakistan are Lahore fort, Rohtas Fort, Shigar Fort, Baltit Fort, Bala Hisar Fort etc..

The identity of the central city of Lahore and among the top forts of Pakistan, Lahore Fort is located in the walled city in western corner. Commonly, it’s known as Shahi Qila which means Lahore fort. The present structure is attributed by Mughal emperor Akbar who rebuilt the fort in the 17th century. Its total area is over 20 hectares and the rules of Mughal, Sikh and British contributed to its development. Let’s talk about its existing structure which has two gates. One is Alamgiri Gate  which opens towards Badshahi Mosque, , built by Emperor Aurangzeb and Second is Maseeti or Masjidi Gate, built by Emperor Akbar which opens towards Masti Gate area of Lahore.

Located in Dina town, near the Jhelum city, Rohtas Fort is ranked among the top forts of Pakistan. It was built by king Sher Shah Suri, between 1540 to 1547 AD.. The actual purpose behind constructing this fort was to detach the strength of local tribes of Potohar called Gakhars. The King wanted to use the Rohtas Fort in war and yearned to save his rule. Regarding architecture, the fort is 5.2 km in its area which is beautifully surrounded by hills. On most of its parts, there is a fine work of ashlar stones.- Rohtas fort has 11 gates named as Sohail, Shah Chandwali, Langer Kahni, Kabuli, Shosho, Talarqi, KKhwas Khani, Gatali, Pipalwala, Mor and Sar Gate.

Derawar Fort is one of the forts of Pakistan which is in its good condition in the present times. This fort was the residence of the royal family of Bahawalpur, It is situated 48 Km from Dera Nawab Sahib, in city Bahawalpur. Having the circumference of 1,500 m, Derawar Fort is the largest fort Pakistan. Its walls are up to 30 meters high.

Kirthar mountain range is famous in Jamshoro District of Sindh which is home to Ranikot Fort. Its circumference of approximately 26 kilometers is the reason of being the largest fort in the world. Ranikot Fort is famous as the wall of Sindh. A beautiful architecture with strategic structure indicates the competence of masterminds of that age.

In Hunza valley, Altit Fort is known for having a bird eye view of old famous Shahra-e-Resham. It is located in Karimabad. It’s considered that fort is around 900 years old which privileges it as the earliest monument of Gilgit-Baltistan. Royal garden and its famous paths, apricot, and orchard trees add much more attributes to the beauty of Altit Fort. Before this fort has been suffered from a great structural misery but with the collaboration of Government of Norway and Japan, Agha Khan Trust has rebuilt it and helped it to become a part of amazing tourist places in Hunza valley.

This fort is known for its historical significance. Having its origins 700 years back, Baltit Fort is one of the most ancient monuments of the country.  -This fort has experienced many alterations and updates in its structure over the centuries. In the 16th century, the princess of Baltistan got married to the local prince and got this fort as a dedication of her dowry. Taking this fort as the wonderful tourist attraction, it’s a wooden and stone=structure built aside of Ultar Sar glacier. You can have view of the whole city of Karimabad from up here.

Among leading tourist attractions of Khyber Pakhtunkhwa, Bala Hisar fort is situated in Peshawar. It was the residence of Afghan Kings in the early 19th century. The name Bala Hisar means the elevated high fort. Its artistic view of great architecture amuses visitors a lot.

These top forts of Pakistan play a vital role to rank Pakistan among the list of best tourist attractions worldwide.

Hanna Lake – How To Get and Stay Safe in Hanna Jheel