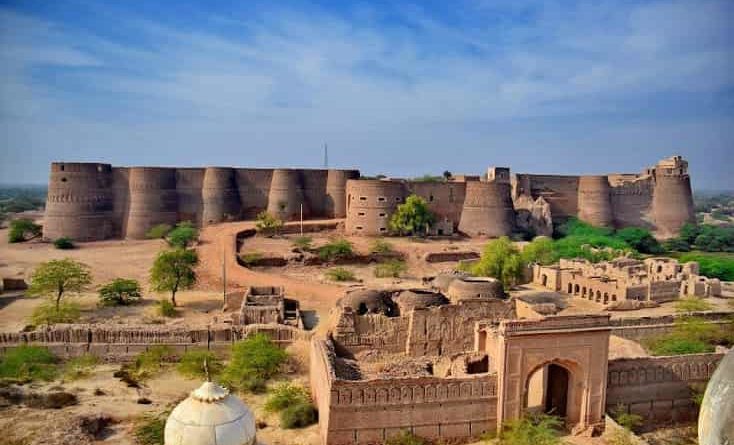 Derawar Fort Bahawalpur is found 100 km (62 miles) from Pakistan. This stronghold is the largest and most magnificent fort in Cholistan. It is a square fort and each wall is 204.8 meters (672 feet) long, vertical 30 meters (98.4 feet) high and its total circumference of the walls is 1500 meters (4921.5 feet). The gate of the fort is on its south side and is reached by a winding road. Most of the castles are geometric designs made of geometric bricks. A strong fort on the semi-desert can be seen many miles away.

Rai Jaja Bhatti of Jaisalmer, a Hindu Rajput, was the one who initially built a fort on this sight. The fort remained under the rule of the royal family of Jaisalmer until it was captured by the Nawabs of Bahawalpur. It was then totally revamped under the management of the Nawab. Due to Bahawal Khan’s involvement in Shikarpur, the fort was lost to the Abbasids. In 1804 AD, the fort was attacked by Nawab Mubarak Khan.

Inside the Derawar Fort, the Nawab’s army provided several buildings. A quarter of the royal family standing desolate inside the fort is turning to dust. Near Derawar Fort are the shrines of four pious Muslims. The four-minaret and three-domed Derawar Mosque is an exact replica of the Moti Masjid in the Red Fort, Delhi, and was built in 1844. 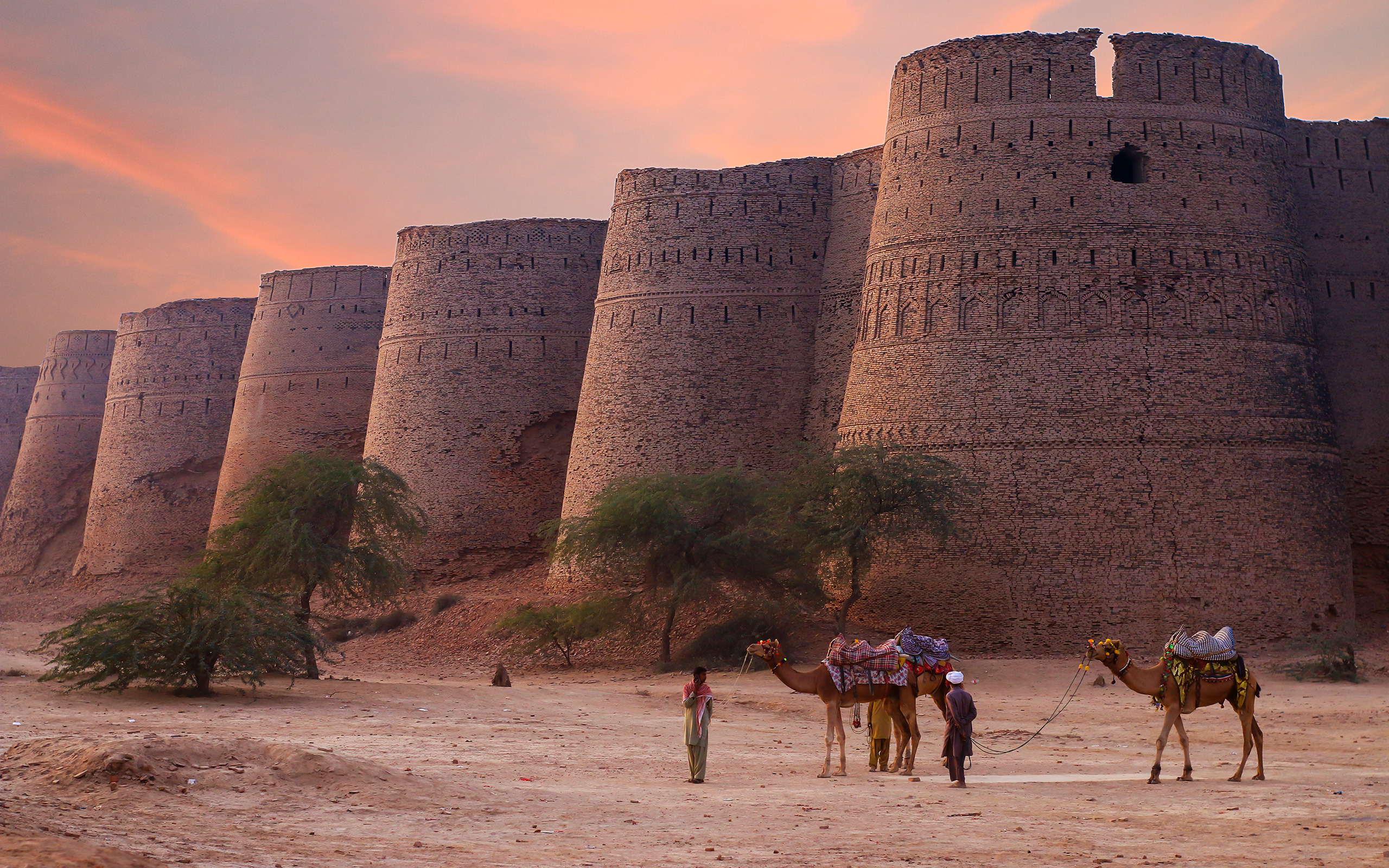 Camping in the desert of Cholistan, overlooking the mighty and historic Derawar Fort, they ride camels on desert camels to nearby places and sing with the locals. Visit the magnificent places of Bahawalpur and get a taste of the local culture. A day full of exciting history and a night full of music and food! 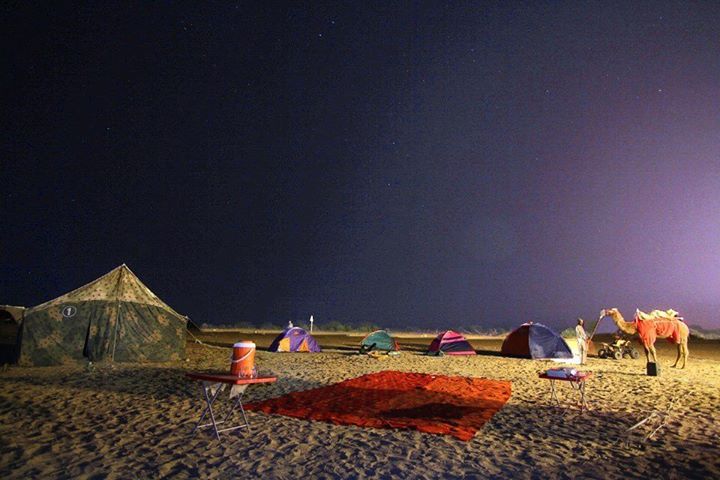 Bahawalpur and Camp Stop at:

Bahawalpur Museum The Museum offers a great insight into the history of the area around Bahawalpur. The museum is divided into different areas. It includes a gallery of Pakistan Movement photos. Islamic art gallery for weapons, textiles, graphic arts and metalware. An archeological gallery. A gallery of coins and medals with replicas from the former state of Bahawalpur. An ethnic gallery with handicrafts from Cholistan and Bahawalpur. A clothing gallery with costumes in and around Multan, Bahawalpur. As well as a manuscript and calligraphy gallery.

The Central Library Bahawalpur Foundation was established in 1924 during the British Raj by Sir Rufus Daniel Assis of the Viceroy of India and Nawab Sadiq Muhammad Khan V, the then ruler of Bahawalpur. The library is the second largest book in the Punjab, containing about 100,000 books as well as editions of major newspapers from the time of the Partition in 1947. The magnificent classic Italian design of the building makes it a must see! Duration: 15 minutes Stop Eight: Noor Mahal, Bahawalpur, Punjab Province Nawab Nawab Adnan Abbasi IV built Noor Mahal for his wife in 1872. The basement has 6 rooms with 14 rooms, 6 porches and 5 dome designs. The design features Corinthian and Islamic style architecture. Subcontinental style Color:

Bahawalpur Next We explore old Bahawalpur, passing through the historic Farid Gate, you encounter the hustle and bustle of the inner workings of the city. Everything from food recipes to shops, as well as everything on the market is included.

Evening entertainment of live music. Accommodation includes: Overnight camping in Mithi with views of Derawar Fort. All camping supplies are provided to you.

Dravar Fort, Bahawalpur, Punjab Province. Was built under In 1733, the fort was captured by Nawab Bahawalpur Sadiq Muhammad Khan, who rebuilt it in its present form.

Abbasi Masjid, Bahawalpur, Punjab Province Abbasi Masjid is located just outside the Dravar Fort. It looks like an oasis in the desert of Cholistan like white marble. There is a Musnad Mosque built in 1849 for the Moti Masjid in the Red Fort of Delhi.

Nawab of Bahawalpur Family Cemetery, the royal cemetery of Abbasi’s family is located away from the fort. All the Nawabs of the royal family of Bahawalpur are buried here. The cemetery is still owned and controlled by the surviving family members of the Nawab. There is a large rectangular room containing the graves of all the 12 Nawabs who ruled the state of Bahawalpur. It also includes the tomb of the Nawab after 1966, who was honored after the integration of the state into Pakistan. The dots and architectural beauty under each dome really give an indication of the opulent lifestyle of these kings.

Masjid Sadiqgarh Palace Siddique Ghar Palace was established in 1882 by His Majesty Nawab Sadiq Muhammad Khan (IV). The palace was built to be a resting place for travelers to Bahawalpur and Lahore. Popular guests at the palace include the King of Iran, Muhammad Ali Jinnah, Lord Mountbatten and many more.

Fast Breakfast: Fresh local breakfast provided on site. No settlement is remembered for this day.